Parts of the Brain Affected by Alzheimer’s Disease

Alzheimer’s disease is a type of illness characterized by a progressive loss of memory and other cognitive functions. This includes loss of ability to carry out routine daily activities, self care and even social graces.

Interestingly, patients with Alzheimer’s disease are frequently completely unaware of the problems they are having with their memory. They will come up with excuses as to why they cannot remember something and are good at covering up their functional short comings. This is a problem particularly when the affected individual lives alone. It is only when a close relative comes to visit that it is discovered that the patient is having major difficulty in functioning.

Onset of Alzheimer’s disease is usually over the age of 65 but can begin at an earlier age. Generally from time of onset to diagnosis is one to two years. It progresses over 3 to 15 years with wide range in variability from patient to patient.

A form of memory loss called Minimal Cognitive Impairment (MCI) is a more common problem. Patients come in with the complaint of having trouble remembering simple things. The memory loss may be only in certain areas leaving all other memory and cognitive functioning spared. While the majority of individuals affected with MCI can continue functioning normally during their life, there is an increased risk of developing Alzheimer’s disease. A recent study showed that 25% of the patients affected with MCI will progress to Alzheimer’s disease. This is dramatically above the risk for the general population in developing dementia. In view of this, early recognition of even “minor” memory loss is clinically important for treatment and long term outcome. Early diagnosis and treatment has been shown to slow the progression of the disease, MCI or Alzheimer’s disease. Patients treated early have an improved quality of life with a significant delay in developing debilitation from their dementia. 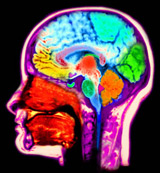 MRI Image of the Brain

Diagnosis of MCI, Alzheimer’s disease and other dementias is purely a clinical diagnosis. There is not a specific test for these problems. Diagnosis relies on a detailed neurological history and examination. Screening blood tests for thyroid, B12 and other metabolic problems should be done. A CT or MRI brain scan is frequently done to look for evidence of stroke or hydrocephalus. Hydrocephalus is an abnormal build up of fluid in the brain. A condition called normal pressure hydrocephalus is a rare cause of dementia and is associated with prominent gait difficulty and urinary incontinence. The diagnosis of this condition is difficult at best. In confirmed cases, putting a fluid shunt in the brain to drain off the excessive fluid may be of benefit.

In patients with MCI or Alzheimer’s disease, there is effective treatment available to stabilize or slow down memory loss. The main class of medications are the acetylcholine receptor inhibitors (ARI). These drugs effectively increase brain concentrations of the neurotransmitter acetylcholine, the primary chemical involved in memory function. Aricept was the first ARI developed followed by Exelon and Razadyne. The newest medication used in treatment of Alzheimer’s disease is Namenda. This is in a different drug class and works by a different mechanism to treat memory loss. It is beneficial to use Namenda in combination with one of the ARIs. The use of these medications in combination with regular exercise and mental stimulation are helpful in slowing the insidiously devastating effects of Alzheimer’s disease.

Depression is a common condition in patients affected with MCI or AD. It is important to recognize this and treat with antidepressants. Modern day antidepressants such as Prozac, Lexapro and Effexor as well as others are safe and very effective in controlling depression. Left untreated, depression can add to a person’s mental and functional impairment. If patients with Alzheimer’s disease have hallucinations, agitation or paranoia it then becomes necessary to use antipsychotic agents such as Risperdal, Haldol or Seroquel.

In summary MCI, Alzheimer’s disease and other types of memory loss are potentially serious problems if ignored or left untreated. Effective treatment is now available to at least slow down the progression of the disease. Co-morbidities such as anxiety, depression and psychosis must also be recognized and treated. This all results in the improved quality of life not only for the patient but for family members and caregivers as well.[/threecol_two]
[threecol_one_last]